Georgia College’s Natural History Museum - Have You Been?

Milledgeville is known for its rich history involving Antebellum times, the Civil War, and the establishment of Georgia’s largest lunatic asylum. What people may not be aware of, however, is the scientific history that occurred throughout the land which we now call “the First Lady of Georgia.” If you love animals, plants and dinosaurs, head on down to the FREE Natural History Museum and Planetarium on the bottom floor of Georgia College’s very own Herty Hall. 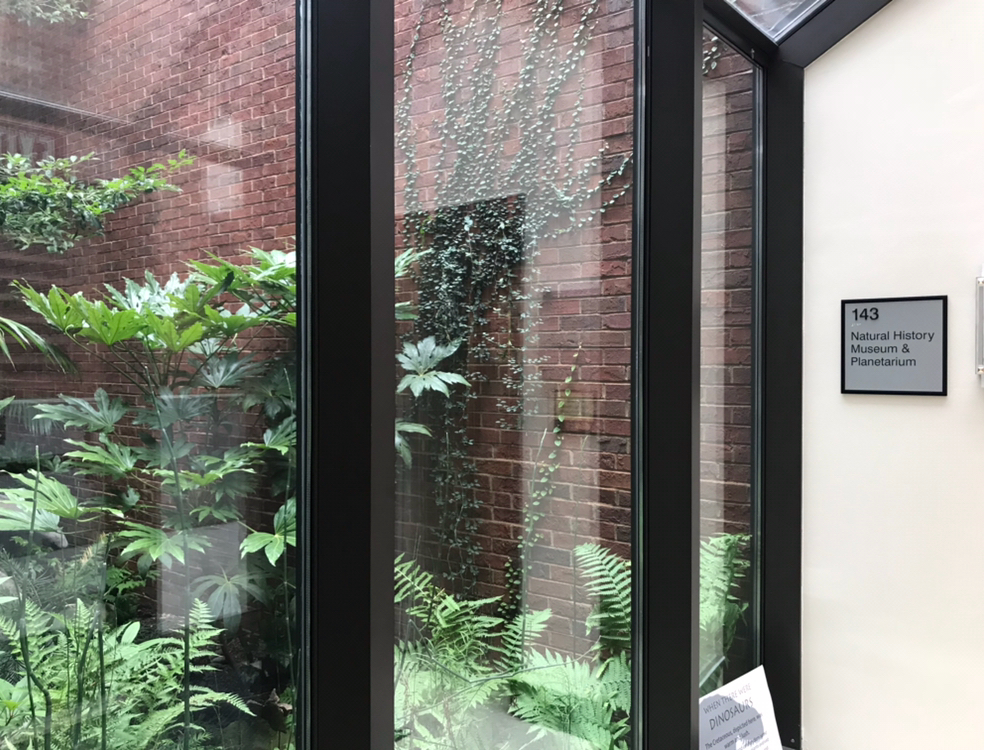 It Began with Invertebrates… 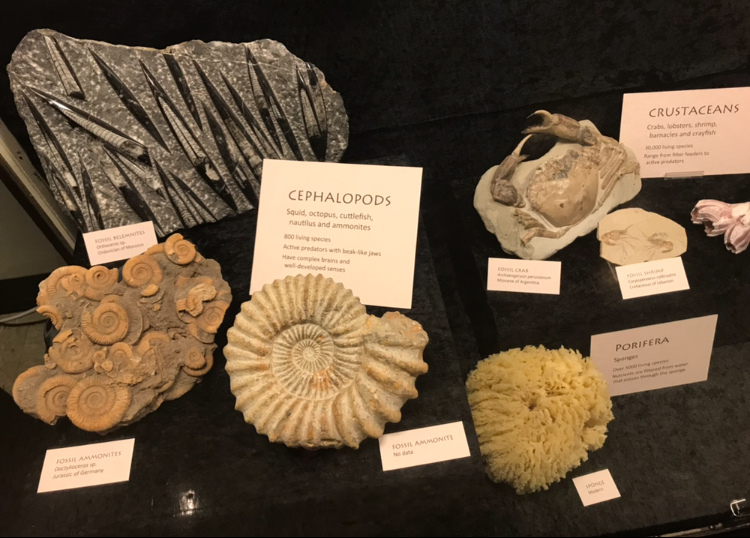 Upon walking into the museum, visitors are greeted with a display of varied cephalopods, gastropods, crustaceans and more. As you move along the first wall, displays teach about how these invertebrates evolved into insects, sharks and rays. 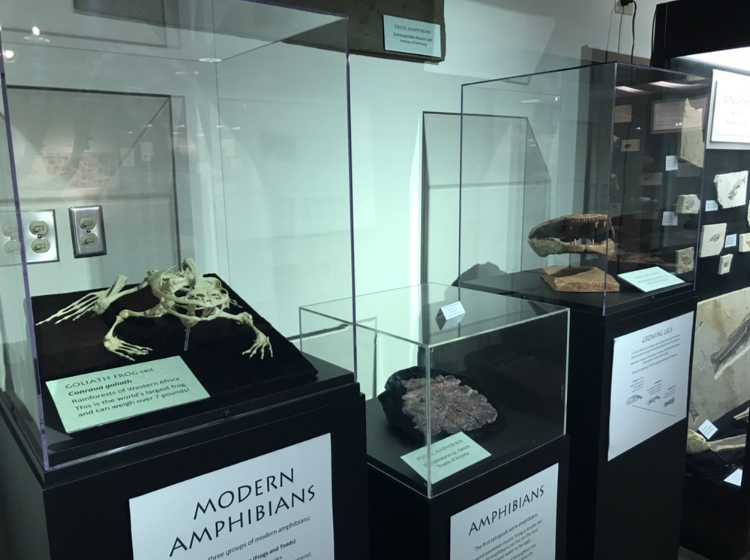 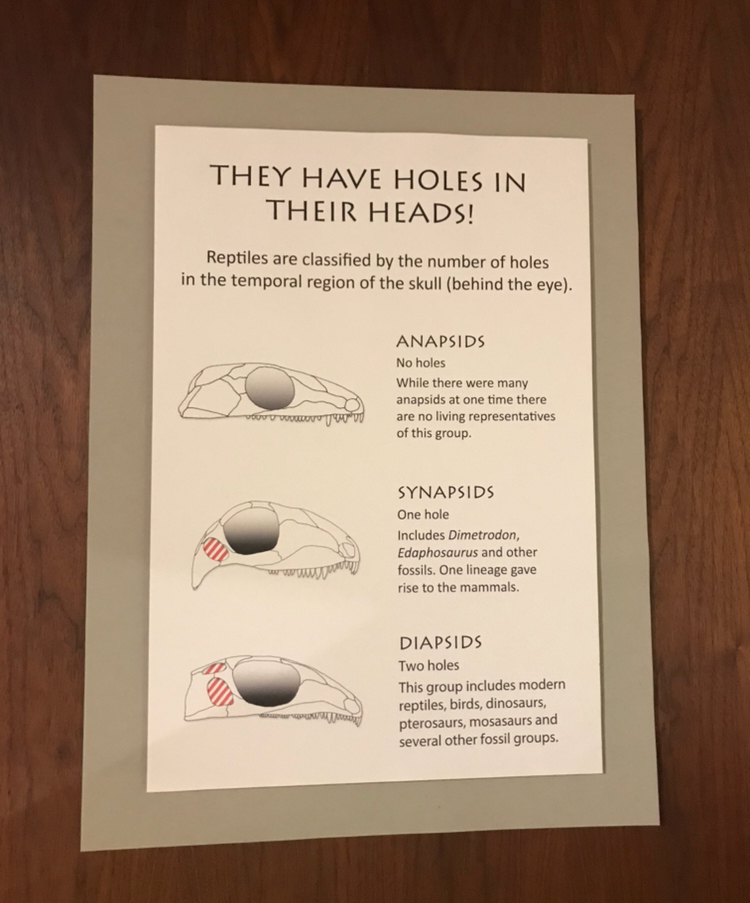 The next few displays show how invertebrates eventually grew bones to become fish, then grew legs to become amphibians - animals who live both on land and in water. Did you know that the word “amphibian” means “living a double life?” Or that reptiles were classified based on the number of holes in their skulls? Reptiles are also credited with the existence of the amniotic egg, which has also been produced by birds, a few mammals and even dinosaurs! Be on the lookout for some dino-eggs in the Natural History Museum. 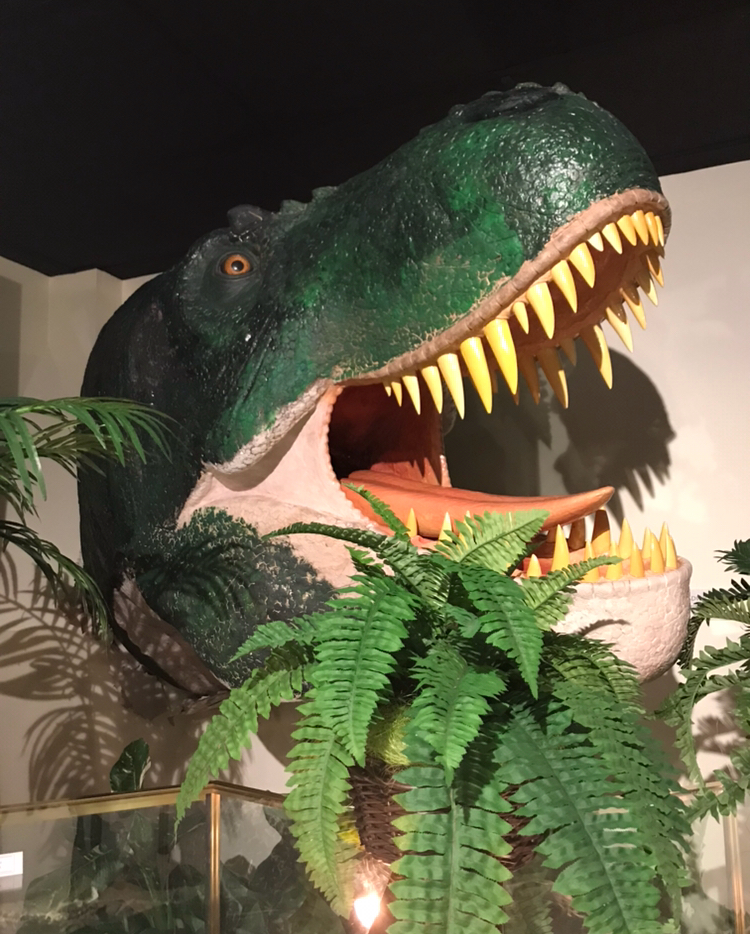 Prehistoric creatures also make appearances throughout the Natural History Museum. Dinosaur bones, fossils and even eggs are displayed for your viewing pleasure.

The Origin of Birds 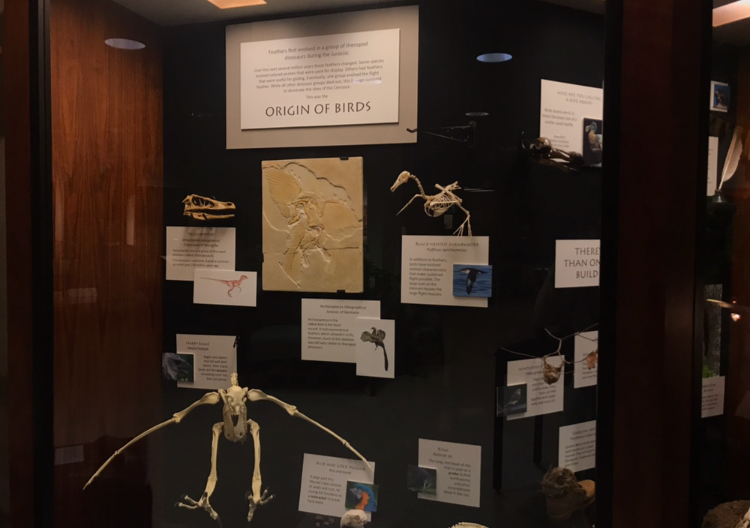 The bird display at the Natural History Museum is full of fun facts that will make you realize what amazing animals they are. For example, the first EVER instrument - a 40,000 year-old flute from Germany - was made from the hollow bone of a bird. Birds also have the most highly evolved color vision of ALL vertebrates! Their diverse feathers, beaks and nesting habits are so unique and interesting. 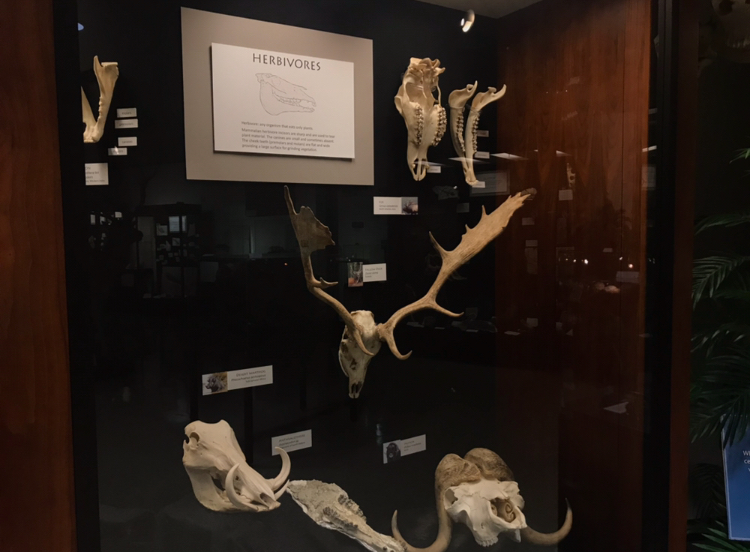 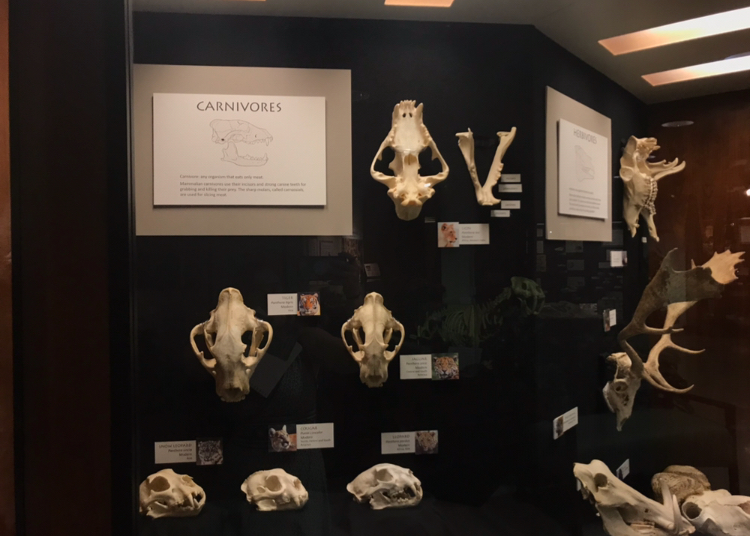 The next display shows the skeletal differences between herbivores and carnivores. Herbivores, such as deer, giraffes and warthogs, have sharp incisors and wide, flat molars used to tear and then grind the plants that they eat. Meanwhile, carnivores such as lions, tigers and other feline friends, have strong incisors for grabbing and killing their prey. 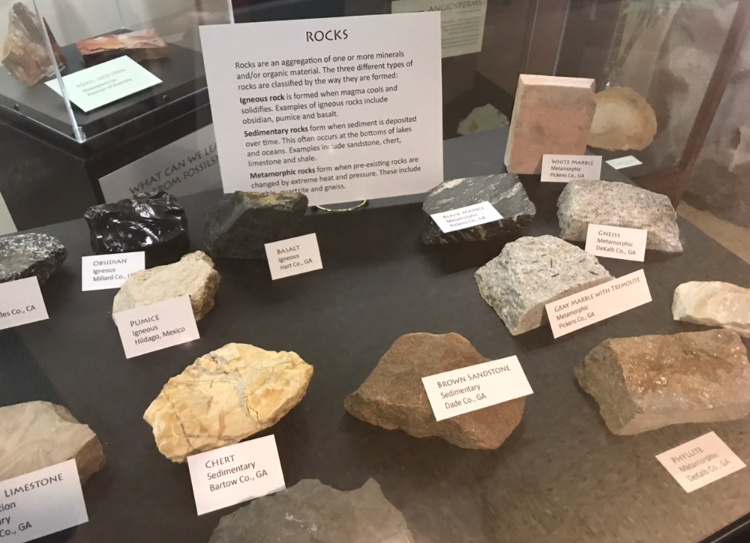 Not only does the Natural History Museum school us on the history of living things - it teaches us all about rocks, minerals and plants as well. In case you didn’t know, minerals are naturally occurring, inorganic compounds, while rocks are conglomerations of one or more minerals and organic material. Can you believe that scientists have named over 4,000 minerals, but only 30 of them are commonly found? 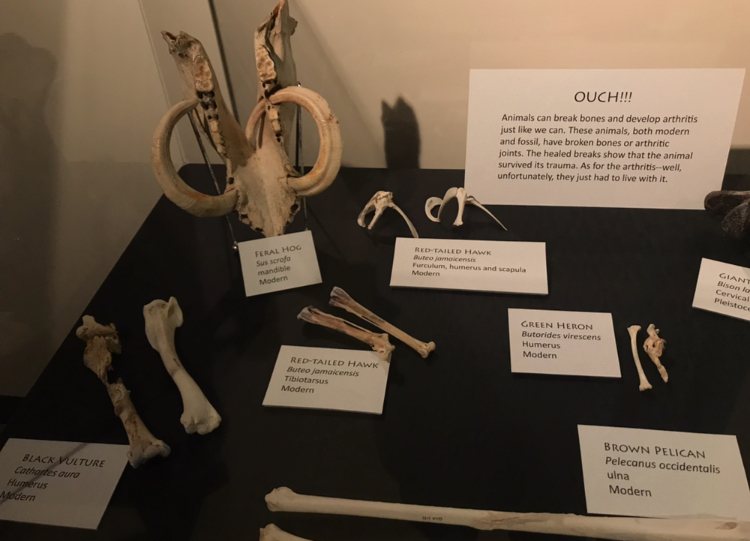 An interesting exhibit in the Natural History Museum showcases that animals get broken bones, too. On display are a few broken arm, leg and wing bones, as well as an ingrown tusk of a feral hog. That must hurt.

When Half of Georgia was Under Water... 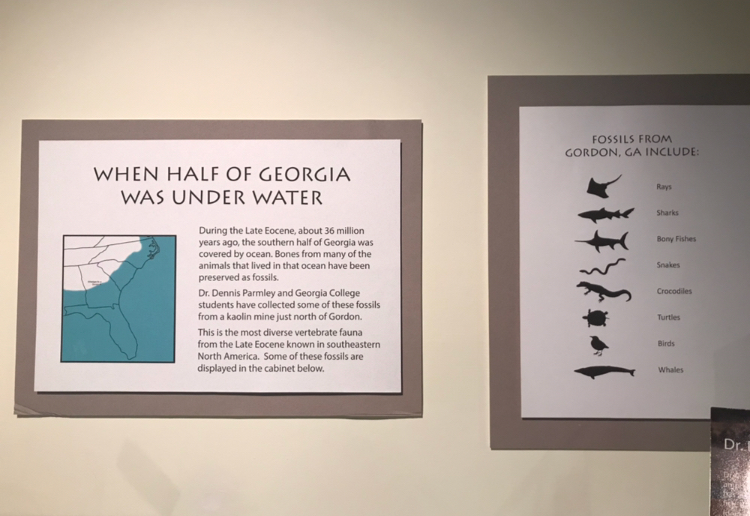 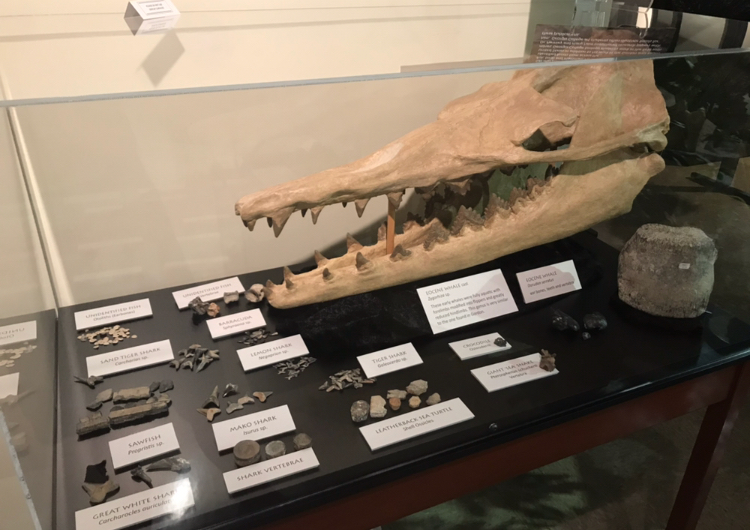 Something great about the Natural History Museum is that parts of it focuses specifically on Georgia, and also features work done by our skilled professors and students. This specific section addresses the Late Eocene (36 million years ago!) when the Southern half of Georgia was covered by oceans. Dr. Dennis Parmley and his GC students have been able to uncover and collect some fossils that preserved the animals who inhabited the South-Georgian oceans during that time period. Rays, sharks, turtles, snakes and even whales were among the creatures that they found remains of. 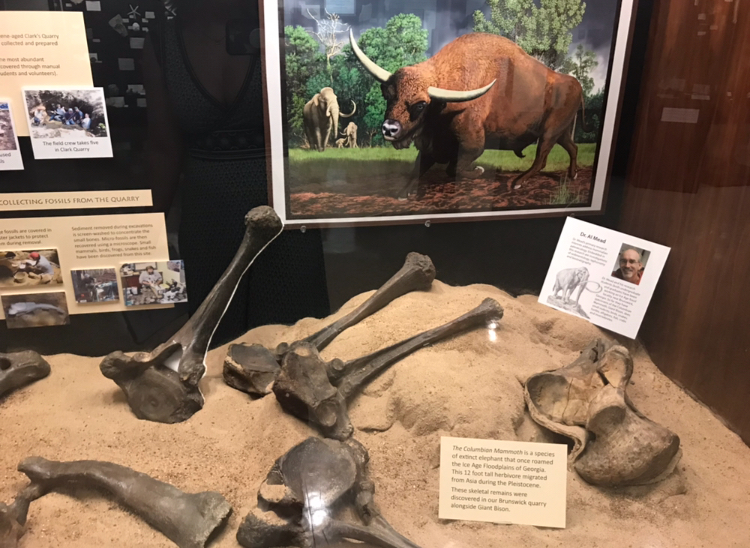 Not only was Georgia once home to a variety of marine life; it has also housed animals from the Ice Age. The Columbian Mammoth, Giant Ground Sloth and Giant Bison were thought to have inhabited the area that is now Georgia. 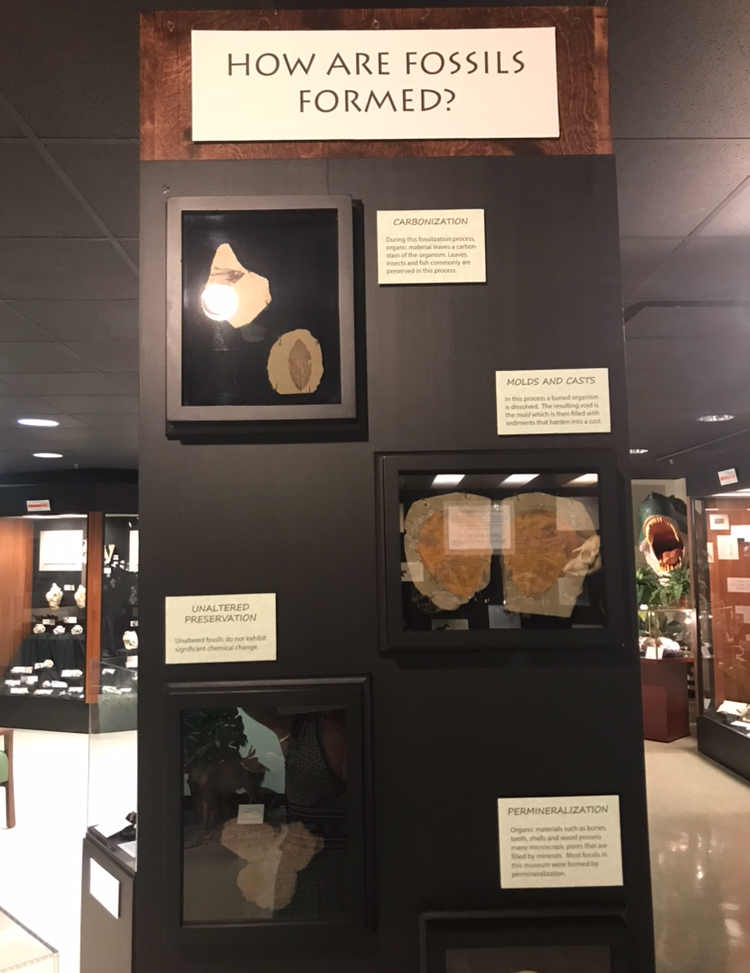 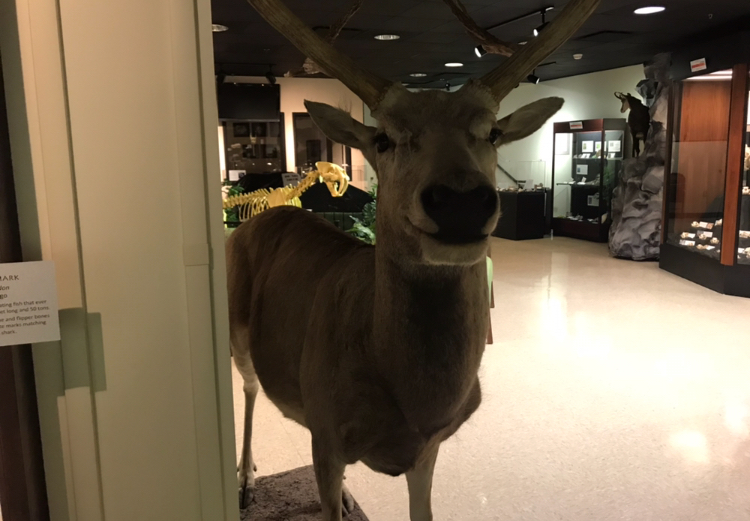 Mallory is a Senior Mass Communication major at Georgia College. She loves writing, traveling and listening to music. If you can't find her, she's either at a concert or sipping on an iced coffee at Blackbird.